DECLARATION
​The European Union offers a plethora of financial opportunities through programs which are coordinated on a central level and are directed towards Europe as a whole. These programs run simultaneously and independently from the NSRF and can provide with additional funds, which are necessary and maybe critical at this point in time.
​
However, the organization and submission of proposals cannot be done by individual bodies. It is necessary to be structured by teams of bodies which, most times, must originate from more than one country.
It is unfortunate that the Municipalities find it hard to spot these funding programs and the opportunities provided, fitting their needs and goals, while also structuring a proposal. Moreover, they lack the ability to network efficiently, so as to form proper teams and promote their proposals.
​
In the cases where the participation is unsuccessful, this happens with limitations which are not so beneficial for the Municipalities and are depended on those who have planned the proposal.

It should also be mentioned that the issue with the efficient coordination is apparent in utilizing the funds from the NSRF, when inter-municipal proposals are deemed necessary and demand the cooperation of many Municipalities and other bodies or when the proposals require expertise on specific maters.

The formation of the City Network aims to fulfill this purpose and will be funded with the form of a civil-non-profit organization, with the intent to provide technical support in informing, networking and organizing the Municipalities which participate in it, so as to submit and realize proposals to European Programmes and utilize the added funding. The Network will be able to participate in proposals and offer support during their realisation.

Another important issue nowadays is the overusage of natural resources and energy stacks, on a level where it is essential to take precautions. The anthropogenic activities which are proven to affect the environment must be planned and realized so as to upgrade the living conditions of the citizens and minimize their negative effects. We take that especially into consideration towards forming the directives of the Network, focusing on sustainable growth and sustainability, circular economy and energy saving, while minimizing the carbon emissions. Moreover, all actions must pertain to the Climate Change which is a recognized phenomenon. Parallel actions must be directed and support the target to efficiently manage the water resources, as, consequent to the climate change, to the development of modern models of social structure, to the technologic developments and overpopulation, is the appearance of serious problems in managing and ensuring the quantity of this precious element.

Participating in the Network are municipalities from Greece and Cyprus with common characteristics, overcoming borders and supporting the Greeks in the topic of technical efficiency to support european proposals. Aknowledged Universities and Institutes will also participate.

The first priority of the Network is the coordination and the organisation of its starting point. The personnel will originate from the municipalities.

The Headquarters of the network will be the municipality of Pylos-Nestoras while simultaneously a branch will be created and will be the center of all activities. The possibility of creating branches in each municipality and also in Brussels and Cyprus is open.

The first actions to be realised, aim in organising the information on funding programs and disseminating it to the members.
1.Project analysis of European Programmes and funding
All the European funding programs will be targeted and the open invitations will be defined as well as the ones foreseen and describe the profile of the possible participants, the limitations and the opportunities.
​    2. Project of recording the information and needs of the municipalities
A database of all the members detailing their goals and priorities including an analysis of the technical and business programs will be created. The next stage is to form teams and plan proposals.
3. Team Organising and proposal planning
Based on the above results, teams will be set up to design and submit proposals coming from similar objectives and corresponding to open or future calls for funding programs.
4. Organisation of technical support for the municipalities
Depending on the kind of the proposals, the technical support will be planned accordingly, based on the theme and the actions.

The best practices which are successfully followed by various members of the network and have developed exceptional applications, will be implemented. This will allow the dissemination of these practices.
​Thematic areas and actions
The company will develop support actions, organised in the following thematic categories: 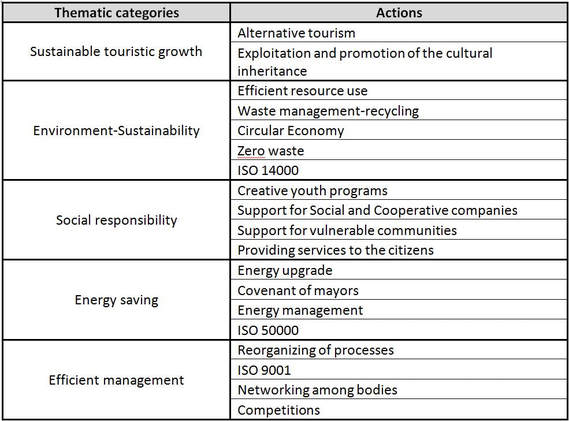 ​Today, on the 10th March of 2017 the founding convention with the participation of the members and the representation from important bodies is taking place.

The council decides the establishment of the City Network with the form of a civil non profit company named: "CITY NETWORK FOR THE SUSTAINABLE GROWTH AND CIRCULAR ECONOMY" aka "SUSTAINABLE CITY".

The council decides for the approval of the of the statute and the promotion for the decision making by the Civil Councils and the managing bodies and commits to the completion of the processes until its creation in two months.
​
The declaration is signed by all the members.